Senior Sarena Anderson collects fossils, wants to be a paleontologist 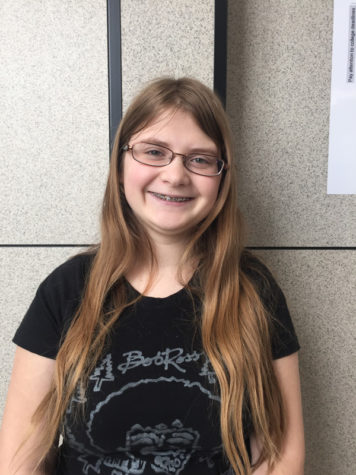 Everyone has something they like to collect. Whether it be figures, books, everyone has that one thing. For senior Sarena Anderson, that thing is fossils.

Ever since she was little, she has been fascinated by fossils, spawned by her mother’s own collection.

“My mom had an entire collection at our first house when we moved in,” Anderson said. “She had it all displayed at the front door. I always thought they were really cool and we’ve kept these fossils for years and added to it and I just helped her add to it.”

Anderson has been collecting fossils for a long time.

“Since I was a little kid when my mom first took me out to hike along the trail,”

“I haven’t found them necessarily, but I’m more interested in vertebrate paleontology, but the ones we have are all the ones you’ll find in Texas which are the aquatic things, in particular, I like trilobites,” Anderson said.

Anderson also has a favorite dinosaur.

“It is called therizinosaurs, and it has claws that are a couple of feet long, just a big old’ herbivore boy with big long claws,” she said.

Anderson has a great interest in paleontology and wants to pursue it as a career.

“I want to be a paleontologist. The only problem with that is that, they don’t really pay well, there’s not a lot of money in dinosaurs.”