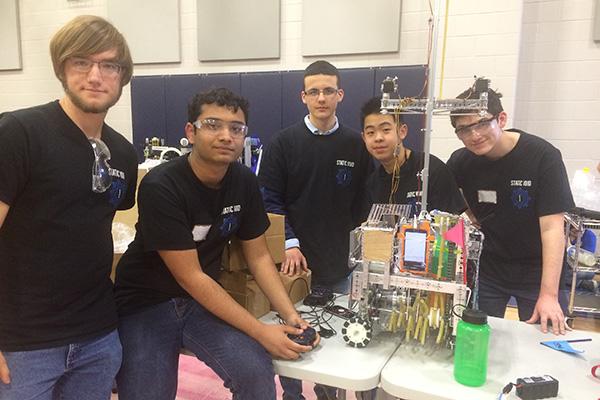 After winning the Innovate and First Alliance awards at the district level, the robotics team was ready for the regionals First Tech Challenge in San Antonio on Feb. 24. To their surprise, they would soon discover that the early call time at 5 in the morning, the long, doubtful drive, and the upset stomachs would be so rewarding. All in all, they were the grand champions along with the members from the other teams that formed an alliance during the competition, and won the third place Think award for best documentation of the robot building process.

“I felt pure happiness when I realized that we were going to super regionals. The three years of learning, hard work and all of the sacrifices the team put in this year, finally paid off,” senior hardware lead Joel Siew said. “The robot worked and we surmounted the odds and disparity in funding and experience.”

Currently, the team is making adjustments to their robot and upgrading its marketing stand before they head out to super regionals in Athens, Georgia on March 23. If they succeed at super regionals and make it to the worlds competition in Houston, they will be amongst the top 128 robotics teams in the world.

“The robot is a never ending struggle,” junior project lead William Smylie said. “We’ve had sensors not work, gears not work, springs breaking, axles breaking, we’ve warped c-channels so that the gears won’t mesh. You get software saying it’s hardware’s fault, and hardware saying it’s software’s fault. You get people beating their heads against the wall because they are stuck on one way of doing things. Everybody works together at least better than they did at the beginning of the year.”

The team is also doing a fundraiser with Chipotle and has received support from the district which will fund the entire trip for 12 members, except the shipment of the robot itself.

The teams that compete at First Tech Challenge competitions embrace the principle of “gracious professionalism” and focus on collaboration.

“If you ever go to a tournament and you need something, you can pretty much ask any team there to help you out,” Chacharkar said. “This is something that sets us apart from other clubs and organizations since you can’t just ask the same thing of a soccer team.”

More importantly, for members such as Siew, Smylie, and Chacharkar who have participated in robotics for several years, the engineering field has become a life goal, not just an extracurricular activity.

“I would love to be either a computer science major or a mechanical engineer major with a focus on prosthetics and robotics so this is right up my alley,” Smylie said. “Being project lead really lets me be a jack of all trades; I get to learn marketing, hardware, software and do leadership skills. I love being project lead, it fits right into my career.”