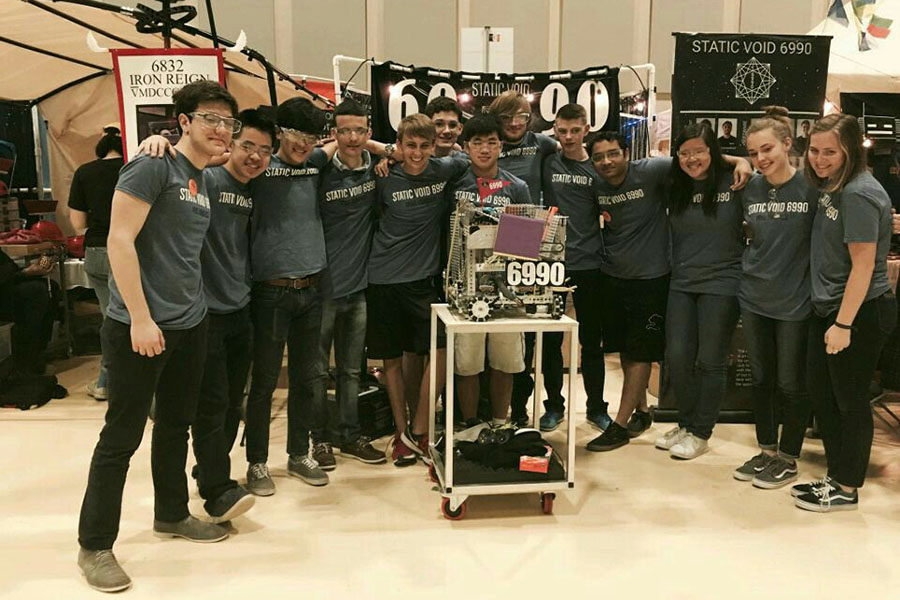 Last weekend, the robotics team departed on a plane to Athens, Georgia for the FTC super regional championship tournament. The team placed 13 out of 36 teams in the Kilrain Division and is now headed to compete at the worlds competition in Houston on April 19.

“There was a lot of excitement,” marketing sophomore Chloe Tosh said. “I was really happy for everyone because everyone’s worked so hard for it and deserves it.”

In preparation for super regionals, the robotics team spent countless hours at school during spring break and after classes the following week, making modifications and improvements to the robot.

“A lot of people are unaware of how much time we put in and how much fun we have,” senior hardware Joel Siew said. “We don’t put in all of the hours because we have to, it comes out of our own will.”

In simple terms, a robot is programmed to act autonomously in the first stage of the match and then is manually controlled to navigate the obstacle course in the second and third stages. The main objective is to make as many baskets as possible using different sized balls as a way to accumulate points. To the team’s dismay, their robot was handicapped in two stages during one crucial duel and wasn’t chosen for the finals alliance.

“We could’ve placed first or second, but we experienced some difficulties with our motor not working,” junior head of research and development Nicola Muca Cirone said. “At one point, we were allied with a team that was supposed to be the second best, but they ended up scoring points for the other team so we lost because of them.”

As part of FTC guidelines, the team had to reach out to their fellow competitors in order to form alliances, having to get out of their comfort zone to do so.

“Cooperation and communication are important to robotics because in the engineering world you are going to have coalitions between different engineers who you might not necessarily know,” junior hardware Connor Rogers said. “Building relationships with other engineers is pivotal to succeeding in a group project and that is what FTC is all about.”

Currently, the team faces a $1,000 registration fee for the worlds tournament which will be held in the George R. Brown Convention Center. They plan to finance it by getting support from more sponsors and local businesses, and possibly coming to an agreement with National Instruments which would double the amount of funds raised by the team.

“Going to super regionals made me gain inspiration for next year for what I would change and make better,” Tosh said. “It was crazy to see all of these teams, it showed how far we’ve come and how well we did even if we hadn’t been able to go to worlds.”