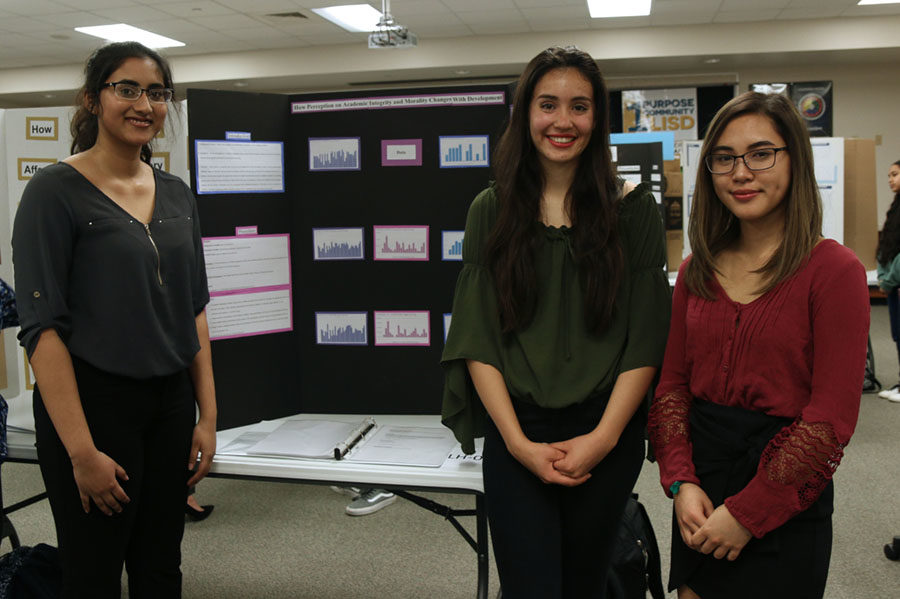 Going on its 15th year, the Science Fair hosted hundreds of projects from Jan. 17-18 in the library and lecture hall. The event is held in high regard by community members, students, and teachers alike.

“Everything leads up to today, the fair,” biology teacher and Science Fair organizer Valerie Gibson said. “This is all of their accomplishments out there, shining, and for me, it’s a huge moment for them to showcase everything they’ve learned over the last six months and what they’ve put their hearts into.”

The students look forward to showing off their projects just as much as Gibson does, as seen by the excitement on the faces of juniors Sannidhi Koganti, Trisha Nguyen and Jewells Escamilla, who have been building on the same project together since freshman year.

“Our project was about assessing the changes in development with academic integrity and morality,” Koganti said. “We came up with this because, especially since we’re in high school, we see a lot of academic dishonesty happening. Students are so stressed and so overcome with the need to be successful that they have to cheat on something or copy homework answers. We wanted to see and find reasons behind that and how it changes and where it starts.”

They were inspired by their own environment by witnessing firsthand what they call the “culture of cheating” was cultivated by their peers.

“I think it’s taught really badly,” Nguyen said. “Academic integrity is kind of institutionalized. I think we should teach it better. Teachers give take-home tests and say don’t cheat on this’, but they’re asking us to cheat on it. The way they’re administering the teachings is wrong too.”

Throughout the year, Koganti, Nguyen, and Escamilla have handed out surveys to elementary, middle, and high school students to collect data for their project. They were thrilled to have the chance to show the results at the fair.

“I think a lot of data to work with is certainly something fascinating,” Escamilla said. “It’s really cool when you see similarities and different shifts, and you can apply it to Erikson’s stages of development. It’s pretty interesting to look at that.”

These eager competitors have already begun the newest addition to the project for next year’s Science Fair.

“We already have ideas for how we’re going to continue our research from this year and make it more complex,” Koganti said. “We want to test how group conformity, peer pressure, and society’s pressures affect opinions on academic integrity, so we can see why from middle school and high school there’s a big change in how they view morality.”

Koganti, Nguyen, and Escamilla’s project won third place and has moved on to the regional Science Fair. All of the winning projects will be competing again in regionals on Feb. 21.