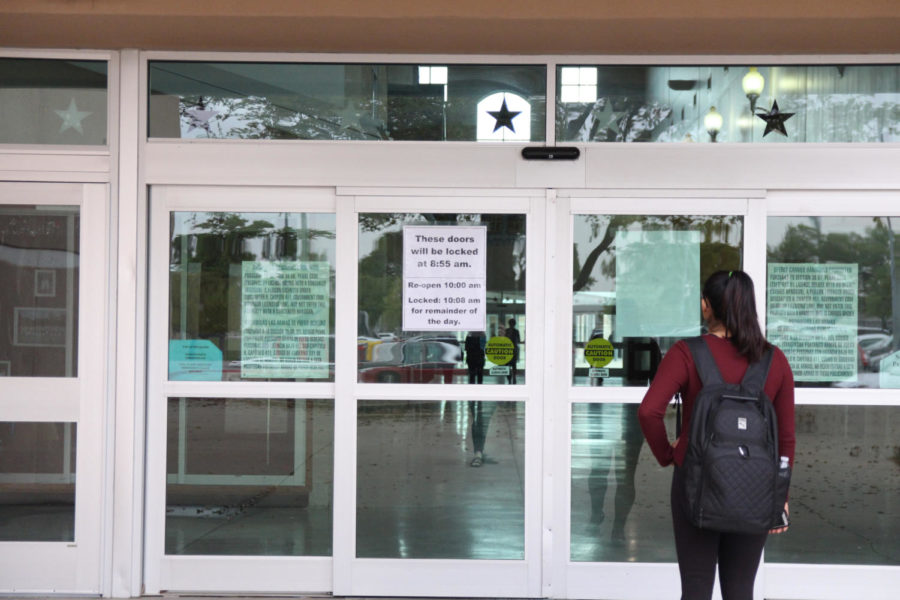 In March, administrators began locking the exterior sliders in the mall at 8:55 a.m.

Following the shooting at Marjory Stoneman Douglas High School in Parkland, Florida, administrators have responded with a new sliding-door policy, as well as a student survey regarding school security.

“Our number one job all day is school safety,” Bryon Ellison, Lead Assistant Principal, said. “That’s an important thing to me—just being out and about, being visible.”

The exterior slider by the A-lot locks at 8:55 a.m. and re-opens from 10-10:08 a.m. to allow students with morning off-periods to get on campus. The sliders remain locked for the remainder of the day while class is in session as a response to mass shootings in public schools across the country.

“In order to keep a school safe, you have to limit the number of exterior doors,” Ellison said. “When I think about the most vulnerable places, [I think of] where the most kids are in one place, ‘where do I need to be?’”

At Marjory Stoneman Douglas High School, Nikolas Cruz shot and killed 17 people on Feb. 14, spreading school safety reform ideas across many communities around the nation. Solutions are split, some advocating for gun control while others for hardening targets in school with more guns and security.

“I can see both ways. I don’t make that decision, and I’ll support whatever decision,” Ellison said.  “But there’s some issues and logistics that need to be thought about and worked out before [arming teachers].”

Senior Sharika Menon is an advanced debate student, and debate coach Sarah Salinas requires her students to be well-versed in current events.

“There is a lot of entrances and not a lot of checkpoints for people to see who is coming into the school and who is leaving,” Menon said.  “I think even the front door is easy to get through. I feel fairly safe, but I think there could be more done.”

In the most recent bond election, voters approved $7.7 million toward the construction of secure vestibules in all schools and alternative schools district-wide.

Also, Ellison distributed a campus-wide questionnaire requesting student feedback about school safety, which was released on March 19.  The survey yielded 453 student and teacher responses, of which 91.8 percent agreed they feel safe inside the classroom, and 87 percent feel safe outside their classroom at school.

“I feel like we’re at an extremely safe school,” Salinas said. “Things can always happen. We can never have a perfect world, but I think that our school has implemented policies and routines that really strive to keep us as safe as possible.”

The school uses Anonymous Alerts, an anti-bullying app, to connect with students about problems they see or experience on campus.

“Don’t ever think something you see is too small,” Ellison said. “Always report it. It’s better for you to report it and it not be an issue than for you to think it’s probably nothing. It’s always better to be safe. You need to let an adult know — parent, police, teacher, AP, counselor, Anonymous Alert — let an adult know.”

In the event of a threat on campus, Ellison said the first thing the administration will do is lock down the school, notify the SRO and get as many students to safety as possible.

VR-TV filmed a school safety video that is approximately a minute and a half long and contains several interviews with teachers and school officials about campus safety.

“Mr. Johnson and I are both having ongoing conversations on ways to gather feedback from not only students but parents and teachers too,” Ellison said.  “Let us know if there’s a weakness or a chink in the armor. Because we want to improve that, and we want to make that better.”