Running Against the Grain 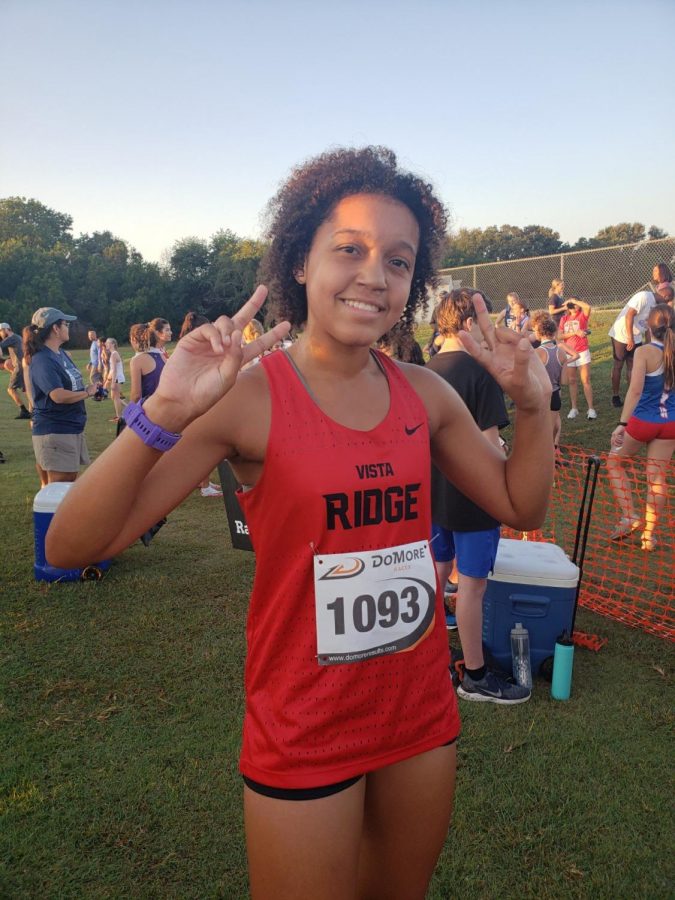 Going up against girls who’ve gone to the Junior Olympics two more times than freshman Audrey Robinson have was a nerve-wracking experience. Add to that the fact that Robinson was an 8th grader, and her competitors were mostly juniors and seniors, Robinson had the feeling that she was up against the odds, and not even the underdog in the situation. Despite all this, Robinson pushed through and became a Nation Champion in the 4×800 at the Junior Olympics, all as an 8th grader.

Going from the small school stage to the Junior Olympics was a monumental shift, and Robinson took it in stride.

“It was my first year ever going, and my track team coach saw I was a pretty good runner, and formed a 4×8 team to try to win, something which he hasn’t done in thirteen years. It was an emotional feeling, and he sees this group of girls, and it’s like “Oh, you have a shot to win.” Robinson said. “It was an experience that I will definitely remember, and it was my first time and I can say that I’m an official national champion. It was definitely a special moment, and I was so nervous. It was such a team event, and you have to rely on everybody. I was worried we weren’t going to make it, and I stuck through with my teammates and had faith that we were going to win, and we did.”

For Robinson, running was used as a way to stay fit, and it wasn’t until 8th grade that Robinson decided that running was what she wanted to do.

“I guess it’s the adrenaline rush, I’ve done so many sports in my time that my love for it at first is prominent, and my love just disappears, and yet, running is the only sport where my love is bigger than it was at the start,” Robinson said.

Robinson said early on in her career that she would go out and run as fast as she could during races rather than pace herself, but over time, Robinson has corrected this.

“I was nervous, my first actual race in 7th grade, I just went out and ran as fast as I could, however, as it was my first meet, I didn’t know how to race at that time,” Robinson said. “It has changed. I still go out, but, I understand now what paces are, and what times I should be shooting for if I want to get my time, but also to have some energy at the end to push.”

For Robinson, running is a journey, and as she trains to hit the 18:30 mark in a race, she knows that she still hasn’t peaked yet.

“I guess it is that I know I’m not at my peak yet, that I know I have a long journey to go, and that there are other girls who I know are the 18:30 mark, and even a 17:30 on the team during races, but I see them have their times, and there’s still a long way to go, and I’m not at my peak yet. I want to catch up and get that sense of what it’s like to be on top.” Robinson said. “I just can’t imagine not running, it brings me so much joy, and it gives me so much freedom because you can run anywhere you want.”

But not every race went well. That day came early on in Robinson’s running career.

“My biggest defeat was 8th-grade districts in cross country, it was one of the worst races I’ve ever run,” Robinson said. “My whole body was in pain, and my head wasn’t there to push through it. I look back and wonder if I should’ve just pushed through it, as there were girls who were ahead of me who I could’ve beaten, but I just couldn’t.”

The hard part about defeat isn’t always losing, but moving forward and learning from it. Robinson has accomplished this and has used it to fuel her resolve to make it to the top.

“There will always be adversity, and no one is able to have a race where they’re 100% good, and I’ve accepted that now,” Robinson said. “If I want to reach the times that I want to get, I’m going to have to push through them, or else I won’t be able to do it when it matters.”

The only way to become better at anything is to be constantly improving, and for Robinson, overcoming her defeat has also gone hand in hand with improving for her.

“I want to just keep improving, and to grow along with the people I run with to help others improve as well,” Robinson said. “It also makes me happy to make others improve, and break their times because I know what it means to break your time, and to reach your goal.”