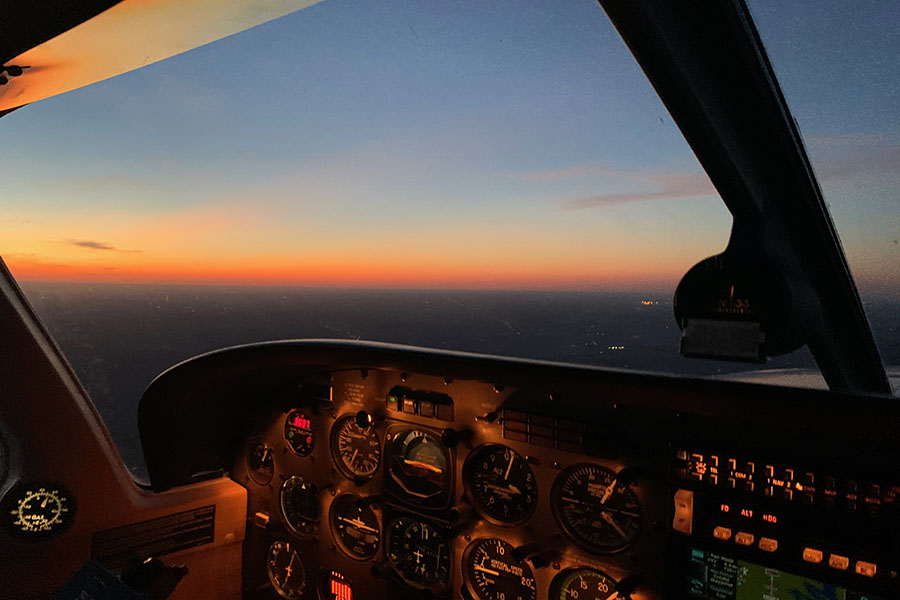 Hovering over the controls, sophomore Carolyn Krushefski intently observes her dad flying the plane as she learns to become a pilot.

“It never gets old,” Krushefski said. “It makes me feel small but part of something big at the same time. Not to mention the sunsets are amazing and looking at the stars is taken to a whole other level.”

Krushefski’s passion for flying really took off in middle school, originally starting as a family career, as her great grandfather, grandfather, and father were all pilots.

“Flying had kind of been a part of my family for a while,” Krushefski said. “It’s been more of a hobby since middle school because my dad and I started going flying more, so I started to learn more about flying.”

Krushefski is not of age to solo a plane, but in the meantime, she is able to talk with air traffic controllers and other planes over the radios, as well as flying with her dad or an instructor.

“It gives you a sense of control even when you aren’t physically capable of controlling everything,” Krushefski said.

In addition to observing her dad, Krushefski attends classes to gain a better understanding about flying.

“Some years my family and I will go to AirVenture in Oshkosh, Wisconsin which is amazing,” Krushefski said. “At AirVenture they have workshops and classes as well as everything having to do with airplanes. During that week I sometimes sign up for classes and practice on simulators to learn a little more.”

Although the balance between school, homework, training and sports can be difficult, Krushefski continues her path toward becoming a pilot.

“Flying helps me forget about whatever I have to deal with on the ground and be in the moment. It requires focus on flying the plane and nothing else,” Krushefski said.